All of the empires symbolized in the giant metallic man of Nebuchadnezzar’s dream are the works of man separated from God—a product of egotism and lust for conquest and domination.

The decreasing value of the metals from the head downward—from gold, to silver, bronze, iron and then to a mixture of iron and clay—portray that the long-term course of human civilization is one of devolution and deterioration. Contrary to the false notions of the secular humanists and others, society hasn’t been evolving in an upward spiral toward perfection. In moral and spiritual terms, just the opposite is true; the world has been sinking lower and lower—to the point that a globalized culture has been created which is now turning human society into a cesspool of abject degradation. The final stage of this process, which we are now undergoing, will soon result in a dystopia of nightmarish proportions, without divine intervention, that is.

Just as in the Days of Noah

Jesus Christ prophesied that at the very end of the current Age, just before the time of his return, there would be a time of trouble such as the world has never seen.

He warned that there would be widespread famines and earthquakes, rampant sin, hatred toward his followers, false prophets, increasing persecution, many signs in the heavens, and a time of great tribulation (see Matthew 24).

Even so, Jesus informed his followers that people will still carry on as usual, not suspecting his imminent return. As Scripture says, “Just as in the days of Noah, so will be the coming of the Son of Man” (Matthew 24:17). Though the people in Noah’s time were warned, they scoffed at the very idea of impending judgement, up until the very day that Noah and his family entered the ark and the door was shut behind them.

And then the unimaginable happened—a deluge poured down from the sky, torrents of water broke forth from deep in the earth, and suddenly they were all swept away. Judgement had fallen on the world and it was too late!

The End of the Age of Deception

The true spiritual nature of the system which now rules over humankind is revealed throughout Scripture to be satanic in its origin (see 2 Corinthians 4:4 and 1 John 5:19). It is a bestial, blasphemous entity which is graphically portrayed in scripture as an enemy of God and his people as well as all the inhabitants of the earth (see Daniel 7:7 and Revelation 17:3-5). 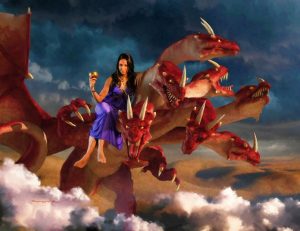 The system is typified as a devouring beast as well as a notorious harlot seated upon a seven-headed dragon. Clearly, the malevolent force behind it is Satan and his demons.

A vision of a future ‘New World Order’ which doesn’t deal with the need to overthrow the satanic power that rules over this world is birthed in either spiritual ignorance or outright wickedness and is a result of having an unrenewed mind.

The dream of halcyon days in a future New World Order which doesn’t include the complete overthrow of Satan’s evil power over this world is an idea birthed in either spiritual ignorance or wickedness and is a figment of man’s corrupt imagination. In fact, it is a mirage that has taken humankind to the very brink of destruction.

However, God has a plan, and as the Scripture says, his ways are higher than out ways and his thoughts are higher than our thoughts (Isaiah 55:9). Fortunately, He revealed his plan to avert an ultimate catastrophe that would wipe out humankind as long ago as the time of the prophet Daniel.

The stone made without human hands which struck the feet of the dazzling human statue in Nebuchadnezzar’s dream is Jesus Christ returning with a host of his saints (i.e., his true followers).  They, along with Christian believers still living in the earth at that time, will set things straight. The disarray and dysfunction which humankind had created will be put back into proper order just as God planned from the beginning.

The man-made New World Order will be no more. Man’s attempt at ruling and reigning on this earth without God’s authority will come to an end.

God’s kingdom will be installed. It will be a time of the restoration of all things (see Acts 3:21). And the glory of the Lord will fill the earth.

So, be sure to tune into our final installment of “An Everlasting Empire” as we get ready for the glorious future the Lord has in store for each one of us who belongs to him!