Indeed, we have all received grace after grace from His fullness… (John 1:16)

In Jesus Christ the fullness of grace is revealed as it rested upon and flowed through him throughout his time of ministry. The awesome miracles performed by Jesus, his keen ability to read the hearts of those around him, the simple yet profound truths He taught, the power of the words He spoke, the impenetrable, supernatural protection which surrounded him, and the closeness of the relationship He had with our heavenly Father, all reflected the manifold grace that was upon him and operated through him. 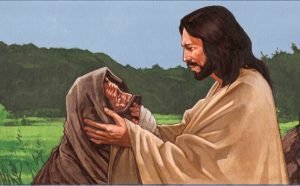 We can see the compassionate side of grace in Jesus when a leper kneeled before him, asking to be healed. The Scripture tells us that he, “…reached out and touched him… and instantly the leprosy disappeared” (see Matthew 8:2,3). Considering that lepers were outcasts from society, deemed “unclean” by Levitical Law, and “untouchable,” the man undoubtedly experienced scorn and was shunned from the day he was declared leprous. But Jesus, full of grace mixed with compassion for this lonely and bereft being, reached out and touched him! 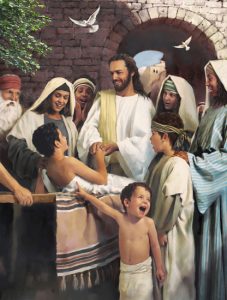 It was by the power of grace-filled words that Jesus raised a boy, the only son of a widow, from the dead. It happened one day when He and his disciples were walking toward a small village. As they approached the village gate, a funeral procession was coming out. Seeing the distraught mother alongside the body of her son being carried on a stretcher, Jesus went over to touch the stretcher. As the pallbearers came to a stop, the Master commanded, “Young man, I tell you: Get up!” And at that instant, the boy’s body came back to life and the lad sat up and he began to speak. And so, Jesus gave him back to his mother—raised from the dead!

The grace for healing was present in Jesus Christ in an abundant overflow. For example, as Jesus was walking through a crowd one day, a woman came up from behind him and touched the fringe of his robe. She had been suffering for twelve years from a condition that had caused her to bleed constantly. But, at the moment she touched his garment the bleeding stopped. The grace for healing was a well-spring within Jesus and she had drawn from the reservoir of that power with her faith.

The Gospels also record many occasions that the powerful grace upon Jesus set captives free, delivering them from demonic possession. One time, after crossing the Sea of Galilee in a boat, Jesus was immediately confronted by a demon-possessed man (see Luke 8:26-39). The crazed person had worn no clothes for a long time and did not live in a house, staying instead in the t 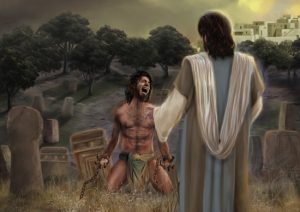 ombs outside of town. He terrorized anyone who came near him his wild behavior. But Jesus challenged the foul spirits inside the man, commanding them to come out of him—and they did! As soon as the news of this dramatic event reached town, many townspeople went out to see what had happened. They came to Jesus and found the man from whom the demons had departed, sitting at Jesus’ feet, clothed and in his right mind. Not only had he been set free from the demons but shortly thereafter he went all through the town proclaiming the great things Jesus had done.

Indeed, in these incidents, as well as in myriad others recorded in the Gospels, Jesus demonstrated that the mighty power of God’s grace can overcome any force and heal any condition—including demon spirits, incurable diseases, and even the power of death.

Clearly, God’s manifold grace was dislayed in the earthly ministry of Jesus Christ in awesome ways. Indeed, He showed us that by God’s grace all things are possible!

Of course, there are also many other things that Jesus did, which, if every one of them were written down, the world couldn’t contain the books that would be written. (John 21:25)